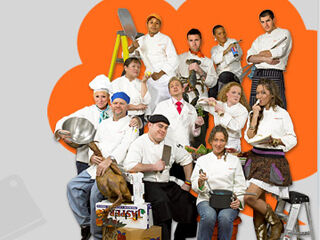 Season 1 of Top Chef took place in San Francisco and concluded in Las Vegas, Nevada. The season premiered on Bravo on March 8, 2006 and ended on May 24, 2006. Twelve contestants from around the United States lived together in a house for approximately 21 days competing in a series of challenges. Katie Lee Joel hosted, with regular judges chef Tom Colicchio and Gail Simmons of Food & Wine Magazine. The ten-episode, one-hour series featured twelve aspiring chefs in the culinary world from varied backgrounds including culinary graduates and students, personal celebrity chefs, a Sous Chef, a line cook, a nutritionist, a Tournant Chef, and a self-taught mother of three.

Each week's elimination was announced in a segment called "Judges' Table."

The runner-up was Tiffani Faison and the winner was Harold Dieterle.

Community content is available under CC-BY-SA unless otherwise noted.
Advertisement